Explorable images of hockey players created using hundreds of their own hockey cards. Click on the images below and then zoom in to see cards details. The gallery currently features the 3 netminders with over 500 wins, Patrick Roy, Martin Brodeur and Marc-André Fleury.
A real treat for sports cards collectors and hockey fans. 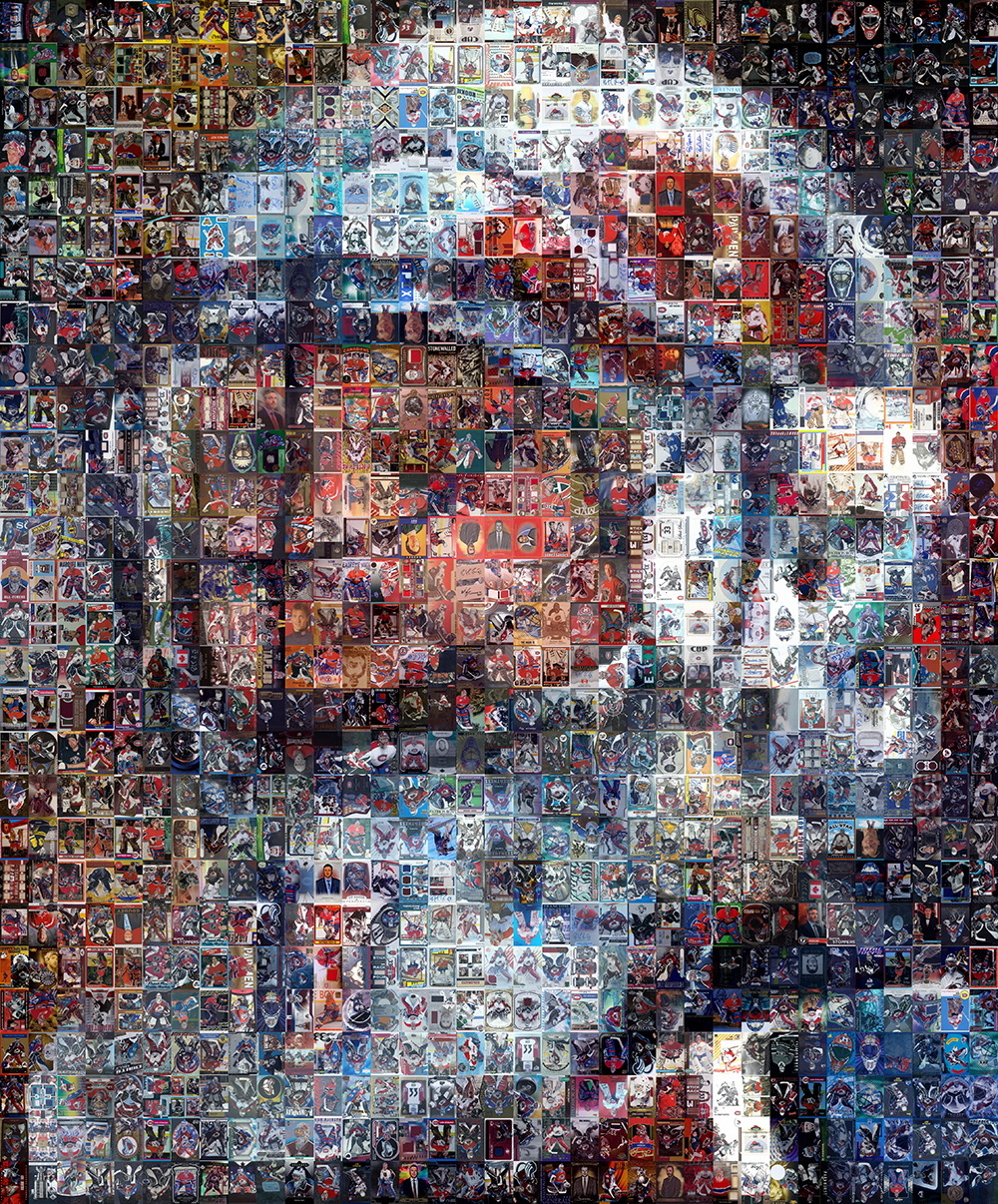 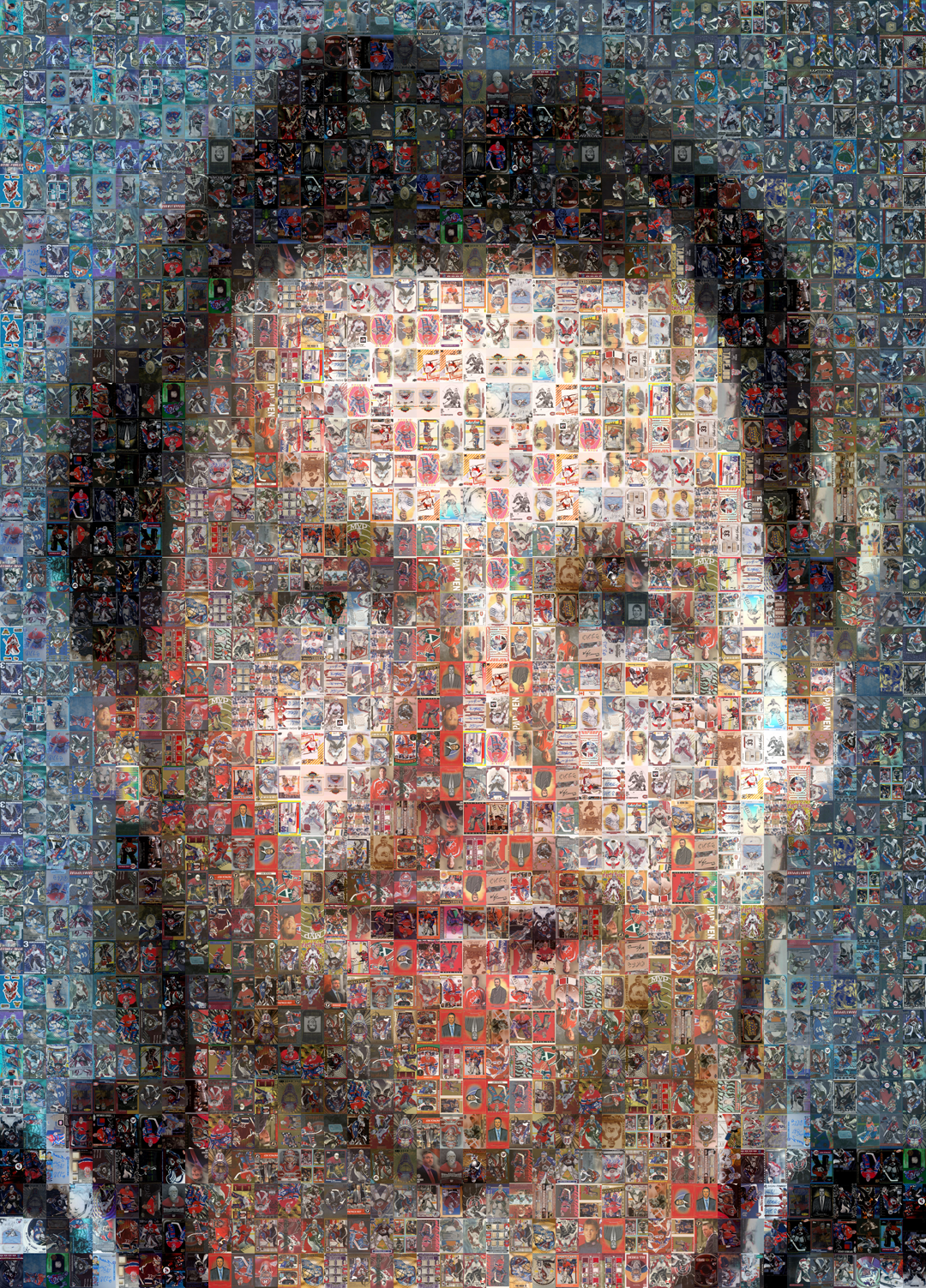 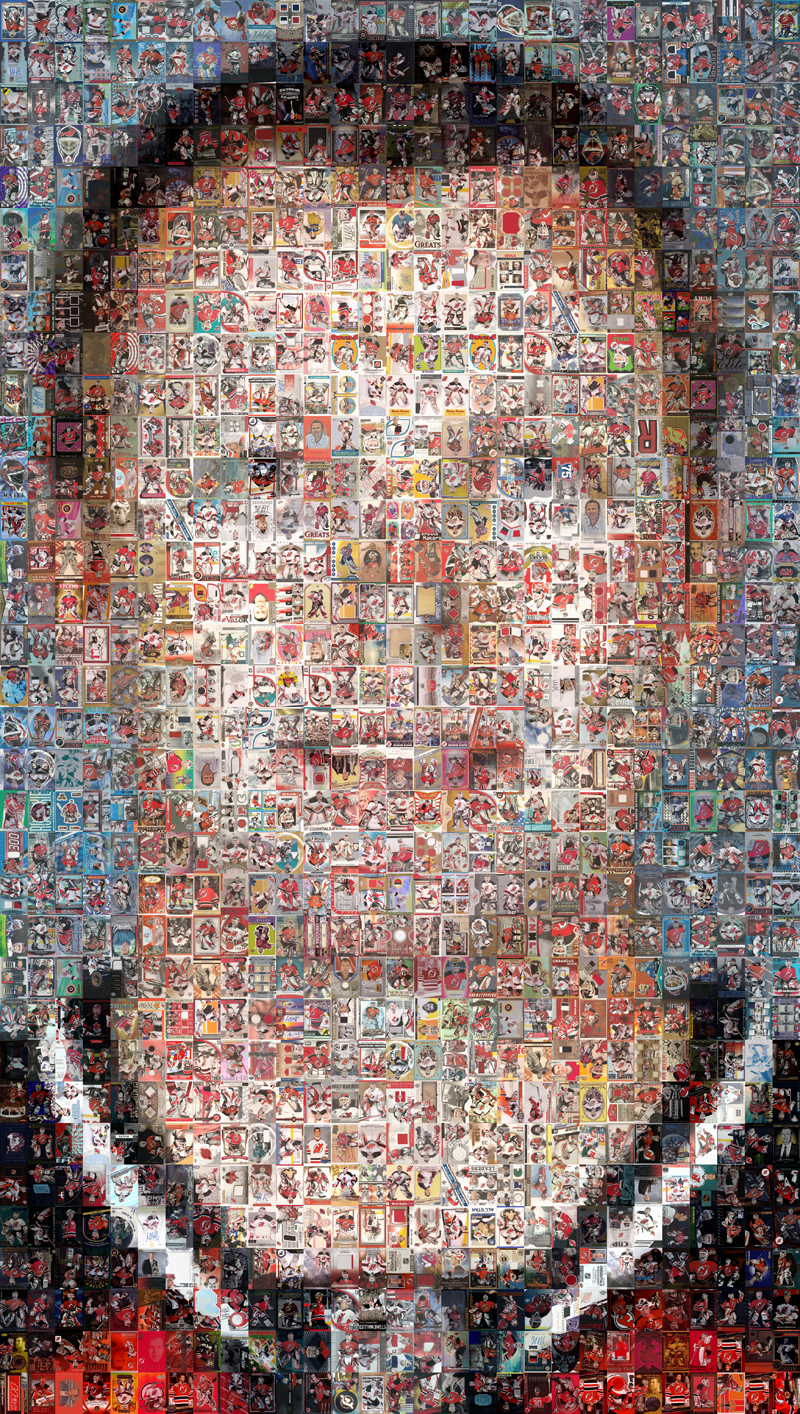 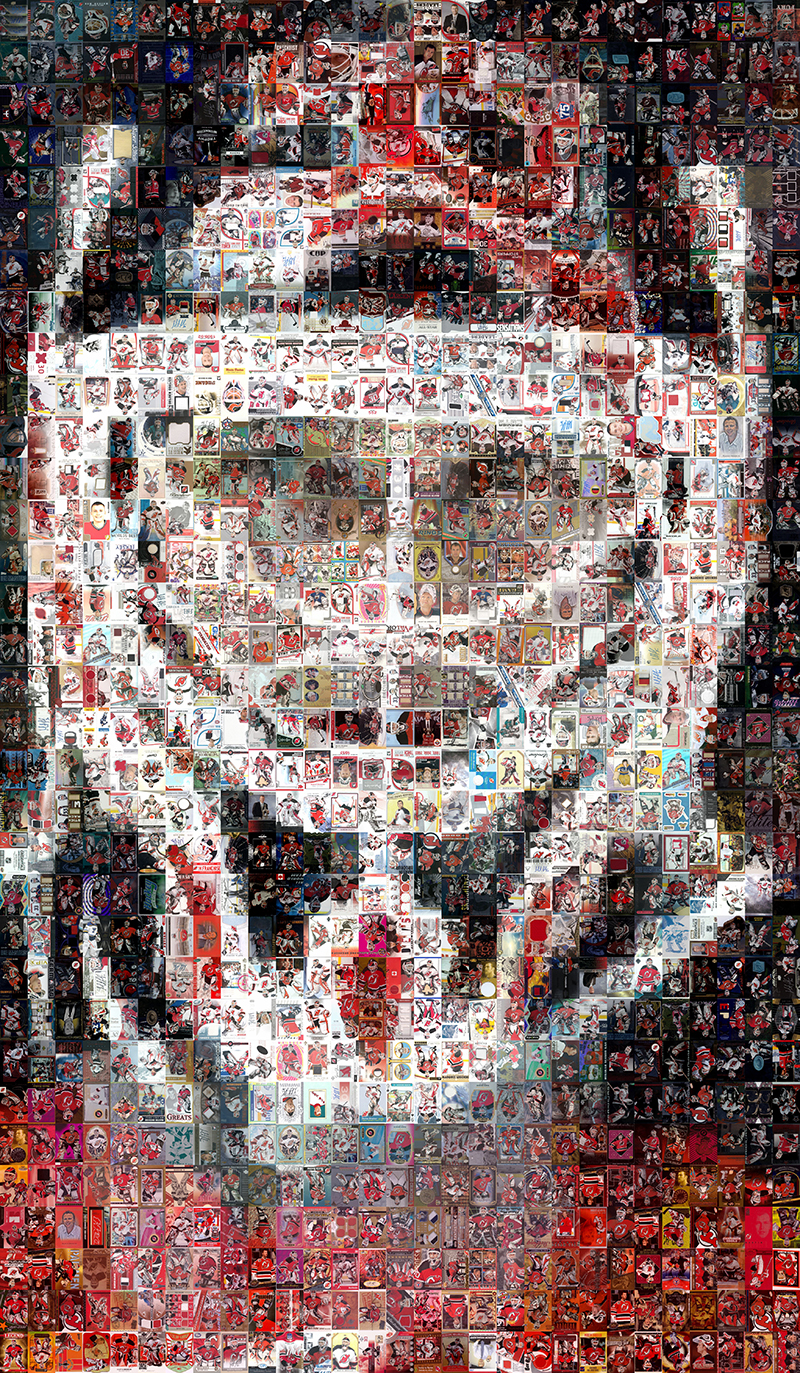 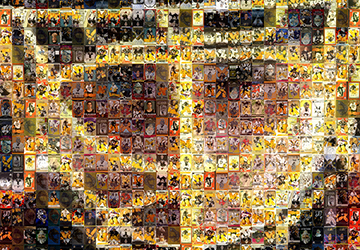 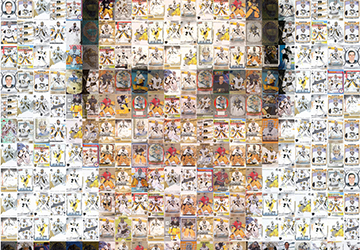 Get a large print, t-shirt, puzzle, etc for you or that special fan you know. As found on Fine Art America's hockey art and NHL art pages.
Grab yourself one of the newly minted NFTs!
Shop NFT collection 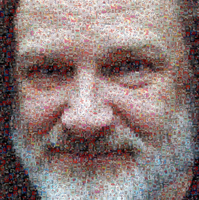 My name is Daniel Blanchard. I grew up in Joliette, North-East of Montreal, Quebec, Canada. This all started when was creating a mosaic from our family pictures using the AndreaMosaic software, and wondered if it would be possible to create one with hockey cards. My favorite hockey player is Mario Lemieux (even though I'm a Montreal Canadiens fan) so I went on eBay and bought a bunch of Lemieux cards and went to work.

My first piece show here is Mario's face in a 6x4 custom made wood and lexxan frame. I was pretty happy with it but I learned a few things I wanted to improve. So I went back on ebay and got a bunch of Gretzky cards for my second piece. This time I made it a little smaller (so it would fit in my car) and had it framed. I also chose to only use portrait cards and didn't rotate them. I floated the Mario piece on eBay and even though there were a lot of coments, my mother is the only one that bid the minimum. These 2 pieces then sat in my office and garage for over a decade before I got back into making hockey cards art. I was working on a Brodeur piece before he retired, but got too distracted to complete it. However, I started experimenting more with using an unlimited amount of the pictures I've taken from the cards. 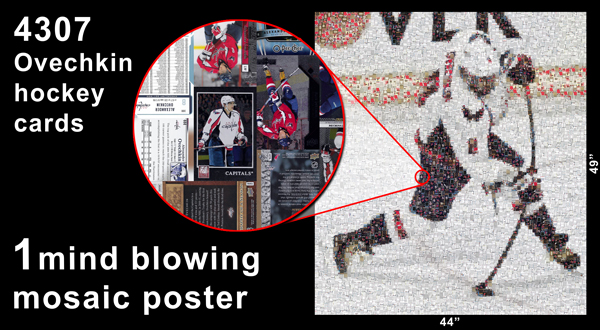 A bit later I bought a pile of Oveschkin cards and created a few pieces using both the front and back of the card's images. I made a giant Ovesckin poster composed of more than four thousand tiles and held a drawing. Then hockey stopped because of the pandemic.
Just before the Stanley Cup Playoff of the shortned 2020-21 season I bought 88 cards of Carey Price and went to work creating again. But this time I learned that I didn't even need to buy the cards anymore to create pieces of any player I wanted, and just had a lot of fun creating this gallery, and the pieces in the store. 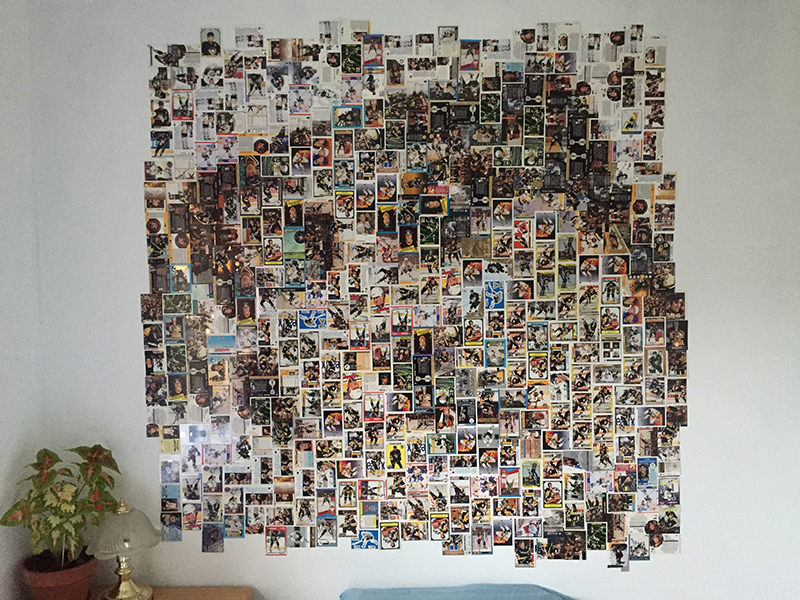 I have been having lots of pleasure creating pieces without having to build them with actual cards, but I did go back to my Mario card collection and re-organized it on the wall of the guest room. No frames this time. There is a total of 426 cards, with mixed fronts and backs and rotations. 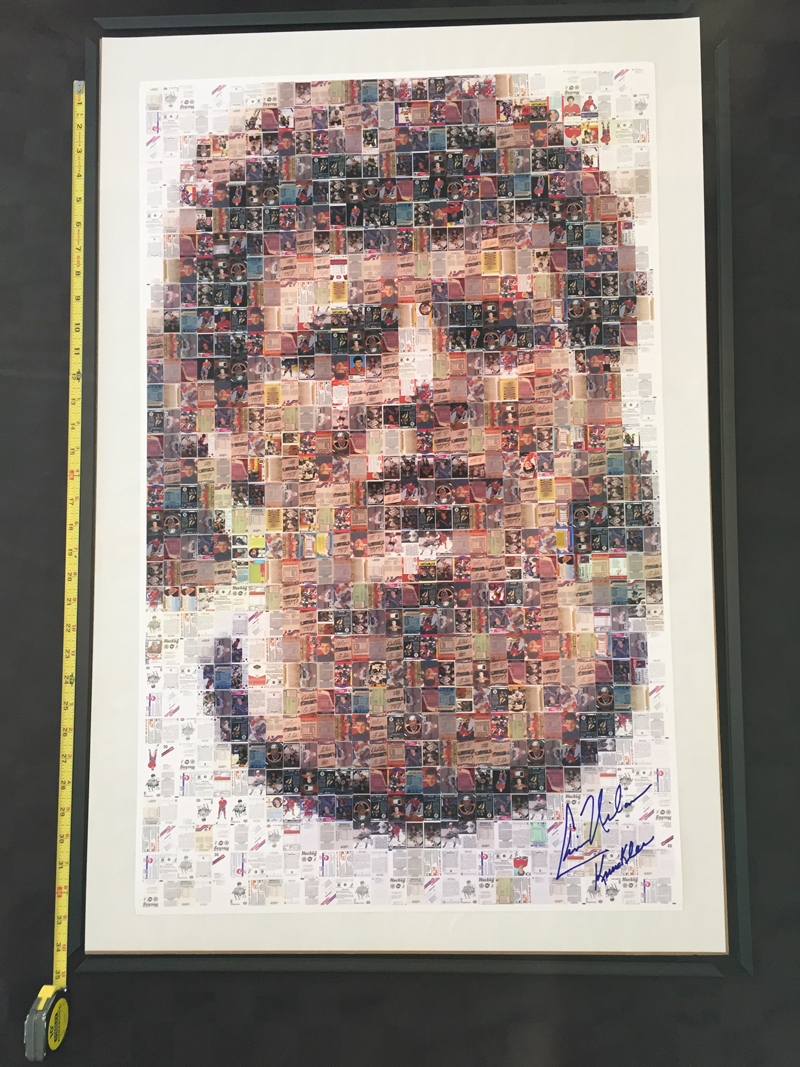 I got my 20"X32" Chris Nilan portrait signed by Chris Nilan himself! And he agreed to do it at the condition that I send him a copy for him to keep. I thought that was awesome. I love Nilan, he always played with such heart. Carbonneau-Gainey-Nilan was one of the best shut-down line in the NHL for over half a decade. 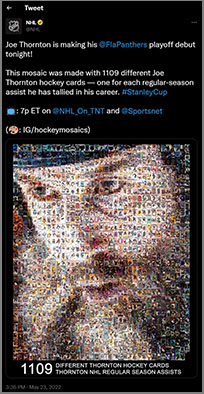 Also, he's the first player to see his own 'hockey mosaic' portrait (and I was told he found it cool and well done!)
It makes me happy every time I look at it now.
The NHL social media section became my first client, featuring my work for the return of Joe Thorton to the 2022 Stanley Cup playoffs.
I hope one day I get to create a giant mosaic in an arena, that would be real fun. Until then I will just keep exploring and making more hockey cards art.

A mural created for the cards and games store Game Time in downtown Joliette. 792 Pokémon cards make the image of Pikachu perched on top of Ash's head. 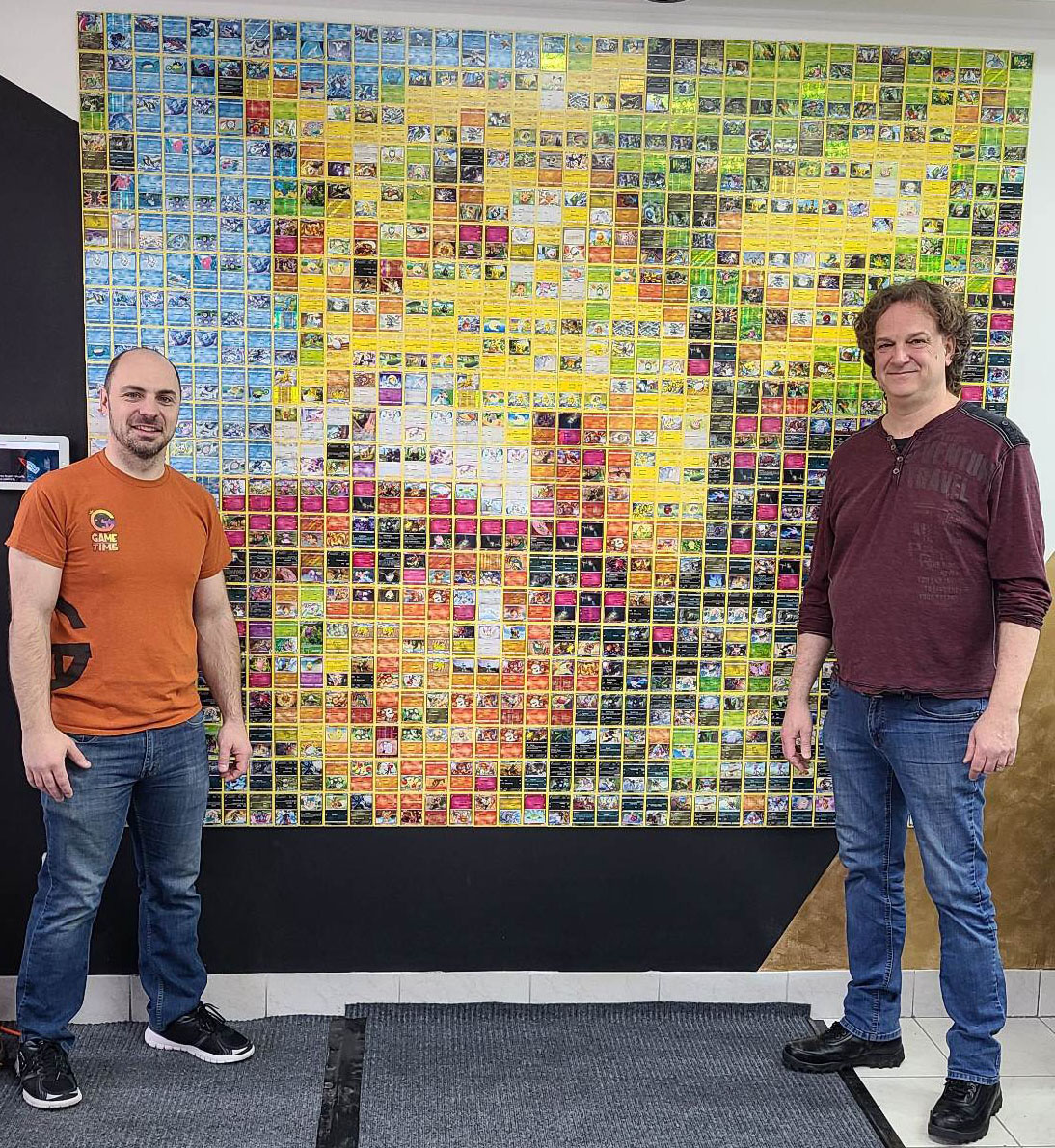 There are 22 rows of 36 cards. The mosaic mesures 6'5" x 7'6". It was a true joy to collaborate with the Gate Time familly. From the initial idea spark, scanning and indexing over 4000 cards, generating different possible concepts, put together and finally hang on the wall, Yanick, Fanny and the kids were welcoming and thrilled to work on this project. 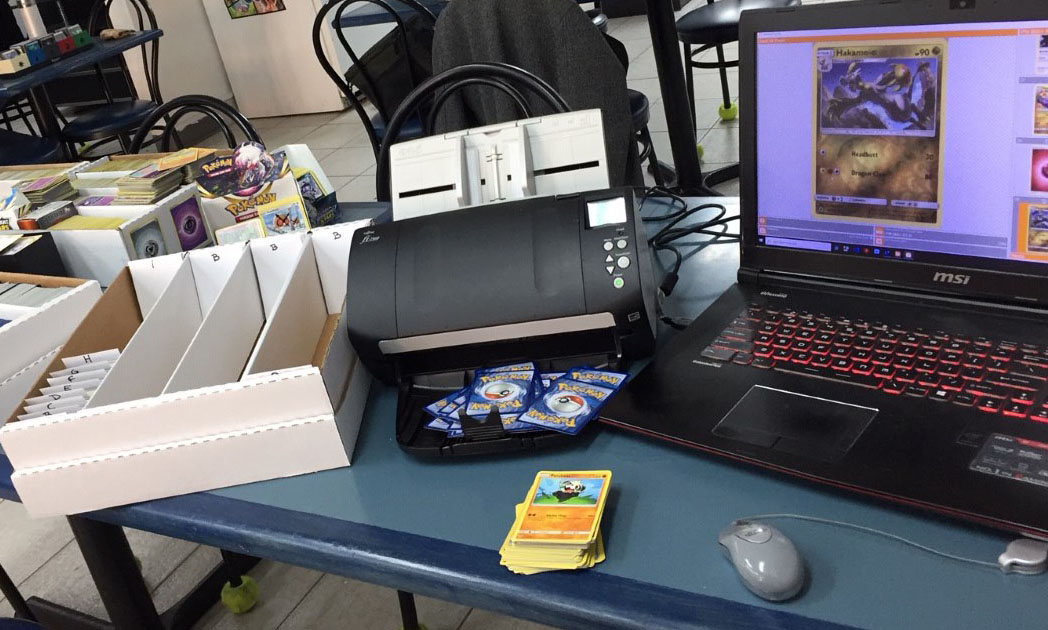 I use the Andrea Mosaic software for mosaic generation, and Kronocard to index the cards scanned with a Fujitsu Fi-7160
Without these tools, it would have taken much, much more time to get to the same result. More than 38 'AdTech Tape Glue Runner' recharges were needed to glue the 792 cards on the coroplast.
It's a real thrill to see people's reaxction when the enter the store. You can explore the mosaic by pressing the button below, or go see it in person at Game Time, 493 Notre-Dame street in Joliette.